The “Rogatsaria” is an ancient pagan custom that is revived each year on the eve of the Epiphany (January 5). Young men dressed in sheep skins go from house to house, wishing a new year to those they meet along the way.

The “troupe” (blouki, in the local dialect) includes the bride, groom, priest, doctor, rural constable, old hag, and the “arabs” (all parts are played by men). Their duty is to protect the bride from the members of other troupes who try to snatch her. However, if they cannot stop the snatching of the bride, then they must make every effort to get her back, punish the snatcher and make him pledge allegiance to them.

The faces and bodies of the Rogatsaraioi (troupe members) are covered in sheep skins, and they have brass bells hanging around their waists. The troupe is always accompanied by a traditional band, and the most typical dance is the Rogatsiaris. Their goal is to go by every house in the village and collect as much money as they can, both in order to maintain their costumes and to fund the traditional feast that follows, in the evening on the day of the Epiphany.

The Feast of the Rogatsaraioi takes place on January 6 and includes food and plenty of drink, with money collected through the Rogatsaria.

On Shrove Monday, known in Greece as “Clean Monday”, which is the beginning of the Greek Orthodox fast before Easter, commences the spiritual and physical “cleansing” of the people. On that day, housewives traditionally cleaned and whitewashed their homes in order to drive out evil spirits. A tradition that was established later is the excursion to the countryside, also known as “koulouma”, which involves the flying of kites, symbolizing man’s liberation for all evil.

On March 1st or on March 21st, on the vernal equinox, children come home from school carrying a jointed effigy of a swallow, the “helidona”, and they sing a type of carols, the “helidonismata”. This custom has its roots in ancient Greece and survives to the present day.

The “helidonistes”, who are mostly children but also adults in some cases, go from house to house singing about the return of the swallows. In the old days, the housewives would give children oil, wine, flour, wheat, eggs and, in rare cases, money. The goods and money that the children collected were donated to the church. Some of the “helidonismata” carols welcome the spring and include lyrics to drive away the winter or its last month, February.

On the night of the Resurrection (Holy Saturday), at the time when the priest delivers the Holy Light to the congregation, the youths of the village set fire to the “afanos”, an effigy of Judas made of a large cedar stack, and they chant the Resurrection psalm.

This custom symbolizes the resurrection and assumption of Christ to the heavens, and is kept alive in the villages of Morfovouni, Mesenikolas, Kryoneri, Neochori, etc.

This is a purely religious custom. On the Monday after Easter, following the liturgy, a procession is formed with the church banners, holy icons, and cherubim, the priest and the church singers, with the faithful following behind holding candles.

The procession goes around the village chanting the Resurrection psalm, while at the entrances to the village prayers are read. According to tradition, this exorcises evil. 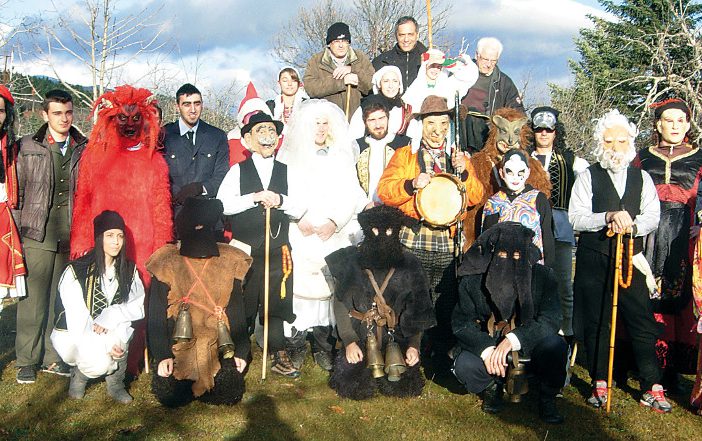