The Thessalian Agrafa mountains also played an important historical role during the period of the German-Italian Occupation (1941-44), functioning as the soul of the Greek Resistance. This was where the rebel bodies of the Hellenic Popular Liberation Army (ELAS) and the National Democratic Hellenic Association (EDES) were created; here beat the heart of the Greek Resistance. The local communities paid a heavy toll for the Resistance, which resulted in great loss of life for local residents.

A significant event was the construction, in 1943, of the allied airport in Nevropolis, a unique project in all of occupied Europe. In order to serve the needs of the war and to facilitate communication with the Allied Headquarters in the Middle East, the decision was made to build a well-protected airport on the Nevropolis plateau, with the help of the locals and the resistance fighters. Initially, it was used to drop supplies to the resistance fighters. The first landing was made by a Dakota military aircraft on August 9, 1943. On that same night, with the same plane, a delegation of the Hellenic Liberation Front (EAM) composed of Sarafis, Svolos and Roussos departed for Cairo. In the Nevropolis airport, landings and takeoffs always took place at night, and the airstrip was lit with gas lamps. In the daytime, the airport was converted into… a forest! The resistance fighters cut trees and “planted” them on the airstrip, thus deceiving any enemy planes flying overhead.

The Germans employed continuous patrols and overhead flights in order to locate the airport, to no avail. The operation of the airport brought retaliations by the occupying forces; the locals paid dearly for it, as the German and Italian forces burned several villages around Nevropolis and in the wider area as punishment. The Nevropolis airport operated until the end of the war and contributed considerably in the victory of the Allied Forces. It was the “ghost” airport. 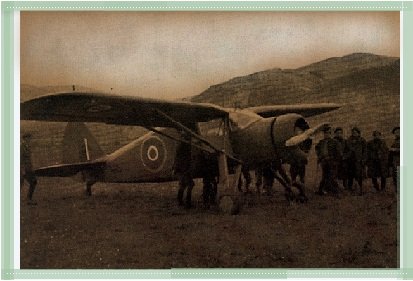