Under Sultan Suleiman (1520-1566), who was called the “Magnificent” and the “Legislator”, the Ottoman Empire reached the peak of its force. At that time, Suleiman decided to subjugate the inhabitants of Agrafa, who maintained a form of autonomy. He sent numerous armed forces under the General of Thessaly, who signed as Veiler Vegi Pasha, but without success. The Ottoman General then invited the Greek notables of Agrafa to meet him in the village of Tsamasi (present-day Anavra) at Karditsa, located at the foot of Mount Katachlorou, which was then named Tamasion.

The meeting took place on May 10, 1525, and included the signing of the renowned “Tamasi Treaty”, which is the oldest text of its type. The treaty:

The Ottomans proceeded to the signing of the Treaty because installing a guard for military control of the region was considered unprofitable, due to the very difficult terrain and insubordinate character of the inhabitants. They considered it preferable to grant the region autonomy and collect a fixed tax.

After the treaty, the region of Agrafa flourished despite the obligation to pay an annual tax to the Ottoman authorities. During this period, large churches and monasteries were built in the area and the art of hagiography was developed. The area attracted scholars like Evgenios Giannoulis Aetolos, who founded the Ellinomouseio of Agrafa, an advanced school of letters and religious studies. Another consequence of the treaty was that Agrafa drew many fugitives who had problems with the Ottoman authorities, and who established rebel groups together with local chieftains. The “kleftes” [rebels] were particularly active in the Agrafa region.

It should be noted that the inhabitants of Agrafa did not acquire these privileges for the first time under the Treaty. They simply succeeded in extending them, after the unsuccessful attempt by the Ottomans to limit their autonomy.

All the villages of Agrafa constitute an autonomous entity, to be governed by the council seated in the renowned town (Kasaba) of Neochorion, located near the Nevropolis plateau.

No Turkish family is allowed to reside in the villages of Agrafa, with the exception of Fanari.

The inhabitants of the plains and the mountains shall communicate freely.

Each community of Agrafa is compelled to pay fifty thousand kurus annually to the Ottoman Sublime Porte. This amount shall be delivered by the Council via a trustworthy person to the seat of bliss (Constantinople).

Done in Tamasio, May 10th, 1525
Veiler Bey, General of Thessaly
The notables of Agrafa 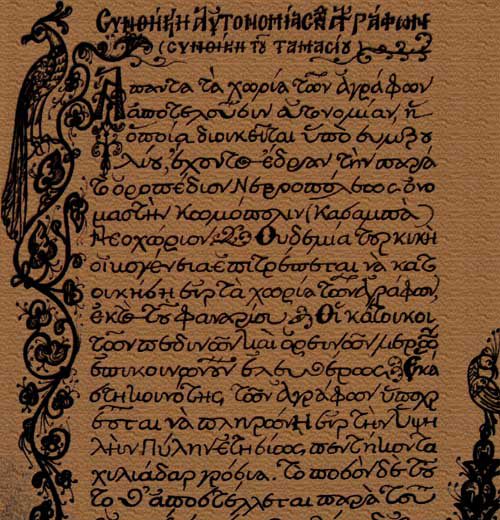