The Monastery of Panagia Pelekiti [the Virgin Hewn in Rock], is one of the rarest religious monuments of the 16th century. It is located to the northwest of the village of Karitsa, built on a high, steep rock (1400m.), with an imposing presence. Tradition says that it was given the name “Pelekiti” (hewn in rock) because, on the advice of the Virgin Mary herself, the almost vertical rock on which it was built had to be hewn with wooden tools.

The construction of the monastery began in the late 15th century by the Pastor Porfyrios, and it was completed in 1529 by the Latter Sainted Martyr Damianos. It comprises two churches: one devoted to the Ascension of Christ Savior, with Cretan School frescoes from 1654, and the other dedicated to Panagia Faneromeni [the Virgin Mary Manifest] with frescoes dating from 1666. Both churches have gold-leaf templums with Cretan School illustrations.

In 1606, the monastery came under the auspices of the Ecumenical Patriarchate. Its fortification allowed it to withstand many attacks and sieges; during the Ottoman occupation, it was a meeting point for local “kleftes” and armed rebels. Also worthy of mention is the role that the monks played in the liberation of Karitsa, and the operation of a clandestine school in the monastery during Ottoman rule.

It was abandoned by the monks in the 1920s; although it suffered various disasters and thefts in subsequent years, in 1990 it underwent an exemplary renovation by the Ephorate of Byzantine Antiquities. Visitors can admire many important relics here, such as holy gospels, manuscripts, church vessels, etc. The monastery celebrates on August 15th, the Assumption of the Virgin. 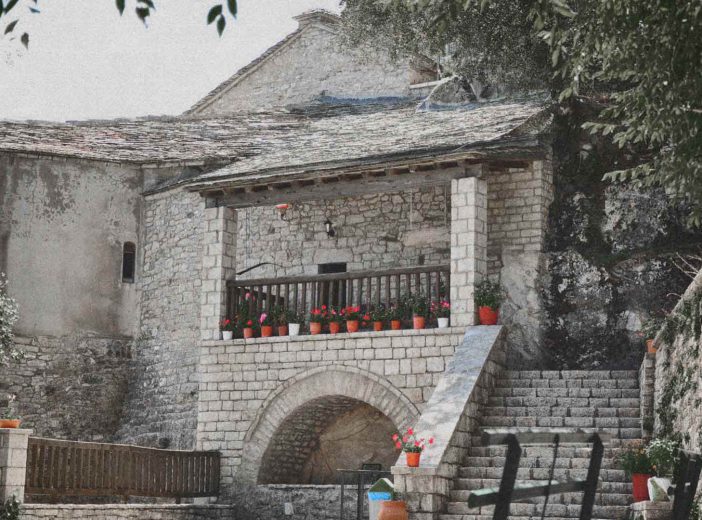