Neochori is a village that is spread on the slope with many “mahalades” (neighborhoods) and a spectacular view of the lake. It’s distance from Karditsa is 37 km and it belongs to the Municipal Section of Nevropolis Agrafa. It is also located at an altitude of 900-1050 m

The name of Neochori and the existence of the place names “Paliochori” and “Ktiria” conclude to the hypothesis that there was an elder village which for a reason was dissolved and in its place was the New Village (Neochori).

It was the basement of the Fanari and Neochori Bishopric from the 14th century until the revolution of 1821. During the greek revolution of 1821, one of the major schools of Agrafa flourished in Neochori. In the Ottoman period there was a den of Klephts and the Armatoloi.

Neochori during the 16th and the 17th century reached its prosperity. There are testimonies of the two wealthy families of the region the one of Panagiotis Kouskoulas and of Panagiotis Morfesis. They funded the painting of many churches in the wider area of Agrafa and other utility projects.

After the destruction of Neraida during the Second World War, here was the basement of the Allied Liaison Mission, while the first Guerrilla Airport was operated at the plateau of Nevropolis in 1943. During the Axis Occupation of Greece, the village suffered several damages, and 50 houses were burned. Today, the visitors shouldn’t omit to see the two old houses in the village that have preserved their beautiful carved terraces, that are examples of the local architectural tradition.

The creation of the lake harmed this settlement, which had the largest properties in the plateau of Nevropolis and resulted in its rapid decline. Twenty-two people who come from Neochori were drowned in the lake when they were transferred by a boat on 12.06.1960 and the whole region was plunged into mourning. Since then the famous Easter triple dances do not take place in the village.

There you can visit the one-room church of St. Nikolaos with a splint at its west side and a porch at its north side. Nowadays are saved only some pieces of its murals that are dated from 16th and 17th century. You can also visit the churches of St. Marina, St. Ioanni, St. George, Holy Mary and Profet Elijah.

Today at the village there are hostels and campings where the visitor can find rooms to rent.

The population of the village is 300 residents during the winter and 1000 residents at the summer period.

Τhe Center of Environmental Education, Research and Information is housed in the old school of Neochori and aims at the authoritative environmental information, at the management of natural resources and the protection of ecosystems in the region.

The Botanical Garden of Neochori is open daily to visitors and includes heathlands, ecosystems of the region, nurseries with lindens and firs, wetlands, herbs and ornamental plants. At Neochori there is an undiscovered cave that is called “Drakotrypa”. The place where the hostels of the village are built offers a unique view to the thessalian plain and to the wider area. At Neochori there is a woodland and a farming cooperative and there are camps, too.

There are also some interesting customs retained, like Rogkatsaria. The village celebrates on the 7th of January and the feast is held out in a specially designed area with plenty of food and drink using financial resources that come from Rogkatsaria. 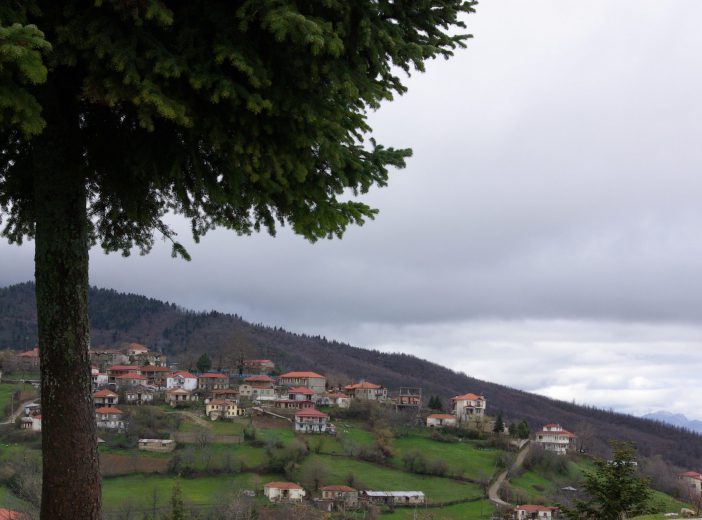