Pezoula distances from Karditsa 33 km and it is built at an altitude of 900m. It is also full of green. In recent years Pezoula and the settlement of Kalivia Pezoulas have a rapid increase due to the development of tourism. It is about a beautiful lakeside village.

The first written mention of the village was found in the late 16th century. The St. Seraphim whose skull is saved in the Monastery of Korona, came from here. Near to the banks of the Grand River there is a picturesque watermill that worths to be seen by the visitors. The stone fountain of St. Paraskevi is maintained in good condition. The fountain of Karagiannis is almost at the edge of the village and the faucet of Alexander is at the settlement of Neraida. The population of the village is 150 residents during the winter while at the summer months it reaches at 1,200 residents. They derive their income from agriculture (corn, potatoes, beans, nuts, apples) and from livestock (sheep, cattle). You should VISIT the church of St. Pantaleon and the watermill. You can also INDULGE in hiking. DO NOT MISS the festival on the 19th of August.

The triconch vaulted church of St. Panteleimon in the village (at Kalivia) that is in a glade of a dense forest with a nice view to the lake (at the past in this position during the 16th century was a monastery), is an interesting sight. It was renovated at the 18th century. From the top of Karamanoli at an altitude of 1,500 m. the view of the Lake is breathtaking. Another point with a spectacular view is the “Monaho klari” that is over the settlement of Neraida. In the village there are about 3,000 acres of forest land with firs, chestnuts and oaks. A dirt road leads to the ski resort and to the mountain shelter. The cave “Drakotrypa” is about 1 km towards to the top of Karamanoli and it is located west of the village.

On the 27th of July the Church honors St. Pantaleon and the artoklasia and the Divine Liturgy take place at the church of the village. The Fair is held at Pezoula on the 15th of August and during the Eve of Holy Spirit at Kalivia Pezoulas.

Before the creation of the lake, the residents of the settlement of Pezoula were working in the fields of Nevropoli and they were maintaining here their huts: they were one-room makeshift constructions that were made of reeds and mud. There they used to store agricultural products and tools. Kalivia Pezoulas is located after the Grand River. This is a developing area that has many cottages. In the center the district road is intersected with the road that leads to the lake at the east and to Pezoula, to Filakti, to Neraida and to the west. Next to the lake there is a sports arena and just below we find the beach, a bar and a summer stone theater that is at the forest.

To prewar resort of Karditsa was burned in 1943 by Germans. After the war it was rebuilt by members of the homonymous building workshop, where it belongs. Neraida offers a spectacular view of the lake and the plains of Thessaly from an altitude of 1200 m through the firs. When the purity of the atmosphere allows it you can see Olympus. In the center of the village next to the small square there is a hostel with 12 beds that works as a grocery store and restaurant, too.

During the Second World War a printshop was operated there. The Englishman Capt. D. Chamson had installed his headquarters at the home of Nicholaos Plastiras. Neraida at the time was the seat of the headquarters of ELAS. The fir tree forest is ideal for walks until the spring of Alexandri as well as until the neighboring villages, Pezoula and Neochori. 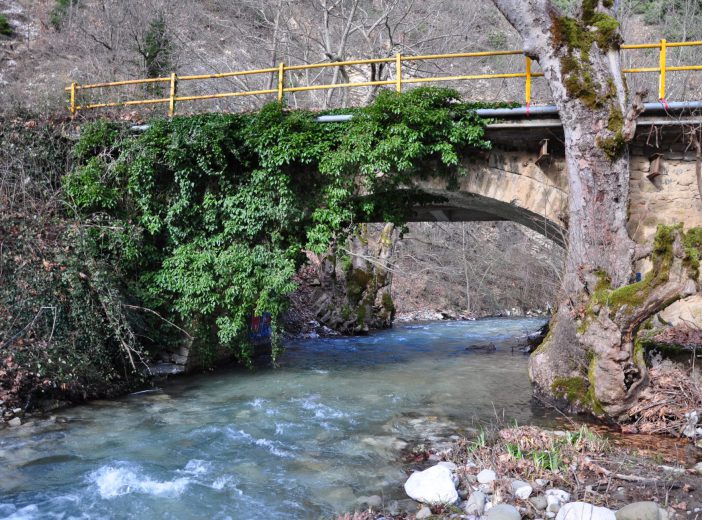